Get Started Today!
Try Our Fall Special!
For 10 Families Only!

By opting into the web form above you are providing consent for Red Rock Martial Arts to send you periodic text messages. Standard rates may apply. You can reply HELP at anytime or learn more. You may opt-out anytime by replying STOP.
Try Our Fall Special!
For 10 Families Only!

I have been training here for near to nine years now and I have not once disliked Red Rock. Red Rock has helped me maintain my fitness, concentration, and focus not just in the studio, but in school as well. They are like my second family and I would recommend them to anyone.

I started training here six and a half years ago when I was 15. The amount of positive change in my life has been astounding. In that time, I've become more coordinated, agile, confident, athletic, focused, driven, ambitious, and I can protect myself. Master Gubler has been a huge mentor to me and has taught me way more than just how to punch and kick. The sense of family and community among the members is incredible, I'm very lucky to have such an amazing group of people to train and grow with. Myself and the other instructors are all very passionate, and I've seen major growth from every one of our students. Additionally, hen I first joined, my mom had such a great time watching me, she joined herself! I absolutely recommend joining Red Rock Martial Arts, it has absolutely changed my life for the better. 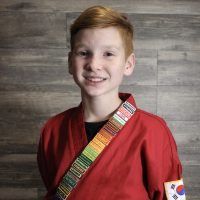 My son has been coming to RRMA for over 3 years. It’s been a great confidence booster for him to discover his martial arts skills. He has lots of fun, gets great exercise, & likes that he is learning self-defense. My son is now a candidate black belt. 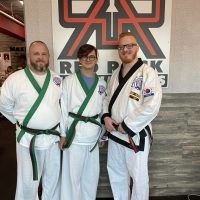 I currently attend Red Rock Martial Arts with my teenage son, and have been for over a year now. The curriculum has been exciting and fun to learn. Master Gubler and his skilled instructors care deeply for each student and it shows in each and every class. It has been a fun journey and I look forward to getting my black belt. 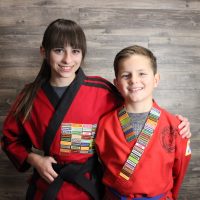 Like a lot of parents of young children, I initially signed my son and daughter up for karate as an after-school activity to keep them active and to expose them to something new. Little did I know, it would turn out to be far more than structured exercise. Training at Red Rock Martial Arts has been truly formative for both of my kids, each in their own way.

For my daughter, karate has transformed her from timid to confident; the family environment of the studio has formed the basis for important friendships; and it has given her a huge sense of accomplishment and personal safety.

For my son, training at Red Rock has given him positive role models to look up to; it has contributed to building a value system rooted in respect, discipline, and commitment; and it has helped him develop important skills for setting goals and accomplishing them.

I could not be more pleased with the instruction, environment, and lasting impact we have experienced at Red Rock Martial Arts. 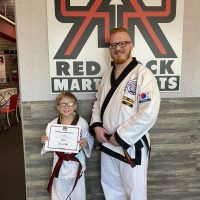 My son LOVES being a part of the Red Rock Martial Arts family! They are wonderful at teaching children self discipline, respect, and confidence. 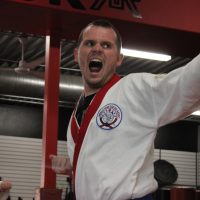 I've suffered from nerve pain and deep tissue damage sustained from my time in the Army for years. Within the first six months of Master Gubler's program I was able to bend and run again.

As far as wanting a real martial arts experience, Master Gubler is a subject matter expert of 20 years in Tang Soo Do and honors its Korean roots and traditions, self-defense and sparring.

He focuses his program on building positive life skills along with mindfulness and awareness. I've been to dozens of studios and I can say his is ONE OF THE BEST.

Amazing place! Skyler did an amazing job on my sons 12 bday party we had so much fun and all the boys can't stop talking about the party!

Our son has been at Red Rock Martial Arts for several months now and we've loved it! Mr. Gubler is very patient and works hard with these kids.
We just did the Glow in the Dark Birthday party. The Gublers did all the work and put on a great party that was so much fun and low stress on my end. I would do it again in a heartbeat.

We are loving Red Rock Martial Arts! The classes are well staffed, teach great principles and encourage growth. Wish we would have tried it out sooner!

We have loved coming to redrock martial arts. Everyone is so friendly. My son has enjoyed going and has learned a lot!

I really enjoy Red Rock and the connections my kids and I are able to make here. Both my kids love coming to class and work hard to take their time and do the correct moves. It is teaching them to be patient and learn how to control their bodies and attitudes.

My son and I have loved it at Red Rock. Mr Gubler has been so helpful with Noah and helping him learn respect, leadership, and focus. It really is a great place for kids and adults as well. Mr Gubler provides a family friendly environment where the parents can watch and participate with their child if they want to join and your younger kids have a T.V room to keep busy. My son has learned so much and has gained confidence he's never had. I've been so proud of him and grateful for the Red Rock family!

Does your child need a supportive, educational, and fun activity? Try our martial arts classes today!

Young children crave structure and thrive in environments like our St. George Dragon Rocker's class that are supportive, educational, and fun.

Give your kids the lifelong gifts of personal success, confidence, discipline, and self-defense!

Instead of giving into the moodiness and attitude, take them to our martial arts school instead!

Martial arts classes are fun, empowering, and provide a great workout for adults.